Bob Giaimo - founder of the restaurant chain Silver Diner hoped to receive government bailout in the next few days, but he did not intend to spend money right away.

Small business owners in the United States are expected to use the loan right away so employees won't lose their jobs because of a pandemic. But there is very little work for Giaimo's staff to do at the moment. His restaurants in Virginia, Maryland, and the District all had to discontinue the meal service at the restaurant until local officials allowed them to reopen.

"Getting a loan is hard enough. It's even harder to use it," Giaimo said. He is lobbying with parliamentarians for more flexible loan terms. 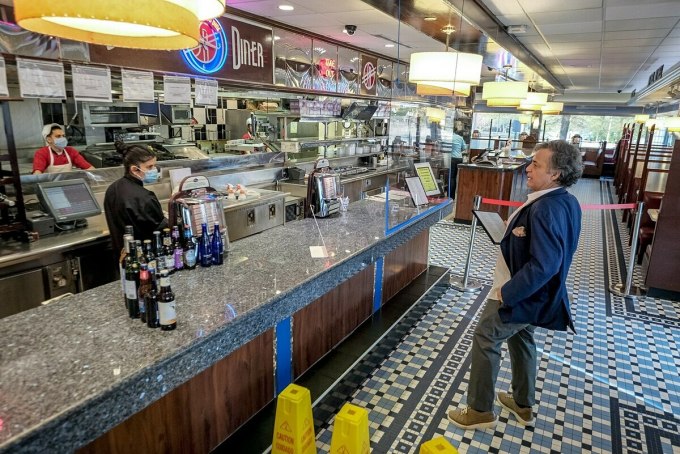 Bob Giaimo (right) inside one of his stores in McLean. Photo: Washington Post

Many small business owners have the same difficulties as him. Last month, Congress passed the $ 349 billion Salary Protection Program (PPP) for small businesses. They are also considering adding 250 billion USD to this package.

These low-interest loans aim to protect businesses with fewer than 500 employees, and prevent workers from flocking to unemployment benefit registries. However, the institute implementing this package still faces many challenges.

Banks - with disbursements - are ambiguous about regulations, causing lending to be delayed. Small business owners find it difficult to apply. And those who have already been approved loan do not hesitate to know how to use money.

The Small Business Administration (SBA), which oversees the implementation of the program, said that as of April 10, more than 600,000 loans - with a total of $ 161 billion - have been approved. However, they did not disclose how much was disbursed.

According to the US Independent Business Federation, about 70% of the 900 companies surveyed said they applied under the PPP program. Of those, three-fourths successfully applied, the rest having problems. For example, some banks find it difficult to accept loan applications, as many banks only accept applications from existing customers.

The bank said SBA and the Ministry of Finance had not made it clear how the program would work, making it difficult for them to finalize loan terms. On Thursday, many American banking associations sent a letter to the US Treasury Department and SBA to recommend this.

Patrick Ryan, director of First Bank, said that from next week, approved US small businesses can receive money. "I just hope people don't expect it too much. It won't be as quick as we get to the switch and the money will fly out," he said.

On the Washington Post, some businesses said they had submitted papers and were awaiting approval. "My phone is always on. Going to the bathroom also leaves the door open. I don't want to miss a call," said Alison Cayne, director of the Haven’s Kitchen cooking school in Manhattan.

Cayne is trying not to lay off employees, but to reduce working hours and reduce wages. Cayne hopes to use part of this money to make up for their salaries.

Melissa Wirt - the founder of an online fashion retailer in Richmond does not want to dismiss 35 of her employees. They currently work mostly at home. "This money will help me not to worry about whether my employees are paid or not," she said.

Small businesses also may not have to pay back the loan if they use most of the money to retain and recruit employees. Accordingly, they will have to spend at least 75% of the money for this purpose within 8 weeks of receipt. The rest will be spent on rent, interest or utilities. If not, the recipient will have to start returning after 6 months.

For Giaimo, this is a problem. In 30 years of business, he never fired his staff. But because of the pandemic, his stores were closed, causing Giaimo to suspend 1,600 out of 1,800 employees (some restaurant chains were still allowed to receive loans despite having more than 500 employees). Most of them are receiving unemployment benefits.

Giaimo maintains a management team and key personnel to receive orders and deliver food. He has applied for a loan of 9.5 million USD and is waiting for approval. However, he said re-recruiting right now is impossible. "There is nothing for them to do now," he said. "If we run out of money now, when the door is fully opened we will be out of pocket."

Therefore, Giaimo wants the rules to change, so that companies are still exempted from loan repayments if they re-hire employees when reopening. At the moment, he wants to use the money to pay current employees and suppliers. Paying a supplier is not for the purpose of the loan.

Many other business owners also agree with Giaimo. Jerry Akers operates a chain of salon chair sales in Iowa and Nebraska. He gave most of his employees unpaid leave. Akers has been approved to borrow $ 1 million, but also plans to recruit staff until the store is reopened. Because then, he will need capital to restart the business.

"Customers also need time to come back. I will have to spend more labor costs, because people are not sure that they are comfortable when they go out immediately. The revenue at that time may not even be enough to cover that cost." "he explained.

Cortney Keene - owner of a clinic for children with autism in Vermont also gave employees unpaid leave. She applied for a PPP loan a few days ago and was approved in early May to disburse. "It was not until the beginning of May that my staff came back. So we don't want to receive money now," she said.