German experts believe that the vaccine and the cure for Covid-19 will not be available before 2021, so it is necessary to deal "in a marathon style rather than sprinting".

Even when the pandemic was spreading all over the world and there was no sign of a peak, European governments began to think about how to reopen factories, offices and schools while reducing the risk. muscle infection. Austria yesterday (April 6) said it would gradually reopen stores after Easter. This is the first European country to do this.

The pressure to make a restart plan for governments is growing, due to the economic damage caused by the blockade measures. People are also concerned that if the blockade lasts too long, they will not have enough food supplies and medical care.

Planning now can protect vulnerable people and help economies rebound faster when the blockade is relaxed. However, countries will have to be very cautious. Because a wrong step could spread the disease more quickly, another round of control was applied and then the economic pain would be much greater.

In Germany, a group of economists, lawyers and health experts have proposed to gradually revive the largest economy in Europe. They want to allow some industries to resume operations, in parallel with the application of anti-outbreak measures again. In a report published last weekend by the Ifo Economic Research Institute, the group argued that the Covid-19 vaccine and cure would be difficult to obtain by 2021. Therefore, Germany needs a more marathon-like response. is sprinting ". 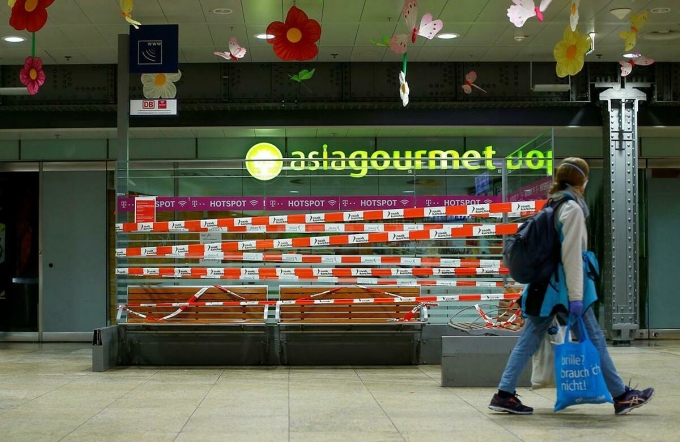 The station is deserted due to a pandemic in Cologne (Germany). Photo: Reuters

"Planning for this transition period needs to begin immediately, both in politics, governance, enterprise level and other organizations," the expert team wrote.

Germany has ordered the closure of schools, restaurants, playgrounds, sports venues and most shops until at least April 20. This is weighing on the economy that is on the verge of recession. German government spokesman Steffen Seibert said yesterday he had not yet set a firm landmark for lifting the blockade. Ifo forecasts Germany's GDP will drop 20% this year if the blockade lasts for 3 months.

Germany has so far launched an economic rescue package worth up to 750 billion euros ($ 825 billion), including stimulating corporate lending, buying shares in companies and assisting workers who are temporarily laid off. This is one of the largest stimulus packages in the world.

Ifo believes that Germany should form an action group right now, consisting of experts and representatives of the people. The group will make recommendations on how to ease the blockade order with offices and public places, as well as when sectors should re-produce. The return to work will be decided by the employee.

Industries such as telecommunications and car manufacturing - which contribute the greatest value to the economy - should be a priority. Meanwhile, jobs that can be done from home should be maintained from afar. Kindergartens and schools can also be opened early, because young people are less likely to have severe symptoms, and parents cannot go to work if the kindergarten and school remain closed.

Companies that manufacture medical devices, or related components, should also be reopened soon. Restaurants and hotels should only be allowed to be "cautious and controlled", as these are difficult to keep a distance between people and people. The bar, dance floor, crowded events should continue to stop.

Experts say the government can also set different standards for each region. The restriction may be relaxed first in areas with low rates of infection, such as rural areas. Areas that generate a certain level of immunity in the population may also be allowed to operate again with fewer restrictions.

Of course, this requires large-scale testing. The government also needs to communicate and train about proper hygiene practices, and how to use personal protective equipment.

The expert group also recommended that Germany increase the production of protective equipment and masks, speed up the production of vaccines and drugs, and establish an information technology platform for strategic planning.

Of course, this group only gave suggestions. Politicians and business leaders are the ones who make the final decision on when to remove the restriction.

CNN thinks that countries planning to restart the economy can look to China to learn lessons of what should and should not be done. China has adopted strong policies to protect the economy. They launch campaigns that encourage people to return to work, revive corporate beliefs, and protect companies from bankruptcy.

However, it is too early to conclude about effectiveness. Beijing's figures also make many people suspicious. Many companies reopened too early, complicating recovery efforts. A top Chinese titanium manufacturer reopened in February, but was closed due to workers' infection.

In the United States, infectious disease doctor Anthony Fauci recently said that although public health was his first priority, completely blocking the economy for too long would have unintended consequences. "People are dependent on the supply chain for food," he commented in the New York Times, "People will probably starve to death, will get sick. If you make everything so disrupted that it cannot exist. , this will be a real disaster ".

Former British Prime Minister Tony Blair also said on the BBC yesterday that he was "scared" of the economic damage that the blockade is causing to the British economy. The Center for Business and Economic Research estimates that the UK is losing £ 2.4 billion ($ 2.9 billion) a day.