Research firm Rystad Energy expects oil exploration and production companies to lose about 40% of their revenue in 2020, or about $ 1,000 billion.

The world oil and gas industry earned $ 2,470 billion in revenue last year, according to Rystad Energy. But this year, industry revenue is expected to fall 40%, to only $ 1,470 billion when Covid-19 crippled transportation demand and forced companies to cut spending.

Before the pandemic, Rystad Energy forecasted oil and gas industry revenue this year of $ 2,350 billion. Profits for 2021 are also now forecast to be lower, at $ 1,790 billion compared to the forecast of $ 2,520 billion before the pandemic.

Sales of this sector plummeted, similar to most other sectors in the context of the worst economic crisis since the Great Depression, has shown relatively clearly on the stock market. The energy sector is shrinking so much that it becomes the second smallest group in the overall S&P index. The industry currently contributes only 3% of the index, compared to 15% a decade ago and 30% in 1980. 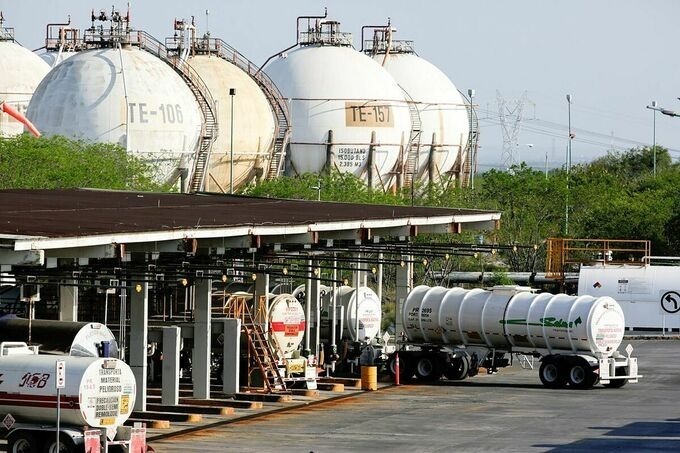 Outside the Pemex refinery in Monterrey (Mexico). Photo: Reuters.

The International Energy Agency projects a record reduction in demand of 9.3 million barrels a day by 2020, as many major economies are closed and millions of people indoors don't know when. Air travel has dropped 95% in the US, a prime example of the world aviation picture.

Brent oil prices have fallen more than 60% since the beginning of the year, to the lowest level in more than 20 years. April 2020 was also the first month to witness a negative crude oil futures contract when the world had no storage space, forcing producers to stop mining.

Exxon is cutting 30% of global spending. Exxon CEO Darren Woods expects oil demand to drop from 25% to 30%. Chevron, BP, Shell and Saudi Aramco also announced to cut operating costs by 20% to 25%. Oil companies so far have spent $ 54 billion less as planned, according to Reuters.

"2020 marks the year when the value of the newly approved oil and gas projects is the lowest since the 1950s, with a total investment of US $ 110 billion, a quarter less than in 2019, because most projects are all postponed, "Rystad said.

There are also some optimistic forecasts about oil prices. MUFG Bank of Japan forecasts that Brent oil price will increase to USD 35 per barrel in the third quarter, reaching USD 46 per barrel in the last three months of 2020 and reach USD 49 per barrel at the beginning of 2021. Of course, the prospects still depend. much on social separation measures and the schedule to lift blockades in the world.

Countries that are highly dependent on oil fields such as Russia, Iraq, Saudi Arabia and many other Middle East and Central Asian countries, will be under great pressure from the industry's revenue decline. "It will be very difficult for oil and gas countries like Russia and many Middle East countries to maintain their budgets," said Margaret Savenkova, an analyst with Rystad.