Stream of fire is on fire

Locals believe that Yanar Bula stream in Azerbaijan has the ability to cure illnesses, so they often come here to get drinking water.

Yanar Bulag (literally the fiery stream) is located in the village of Archivan near the city of Astara, southern Azerbaijan, where the phenomenon of strange phenomenon between fire and water occurs. At first glance, the stream looks nothing out of the ordinary, with cold water gushing out of a vertical metal pipe placed in a domed building. But with a touch of fire, the water will ignite in about 5 to 10 seconds.

Since ancient times, people in the area thought that this strange stream of fire was one of the factors affecting the birth of Zoroastrianism more than 2,000 years ago, one of the ancient religions to worship fire. source from Azerbaijan.

In fact, the stream is so flammable because water contains high levels of methane soaked in from the underground gas fields. However, this source of cool water is completely drinkable, colorless, odorless, tasteless like any other normal stream.

Local people also believe that Yanar Bulag stream has the ability to cure diseases, so they often come here to get water. Tourists also try thrills by taking a sip of spring water, while the upper water is on fire. 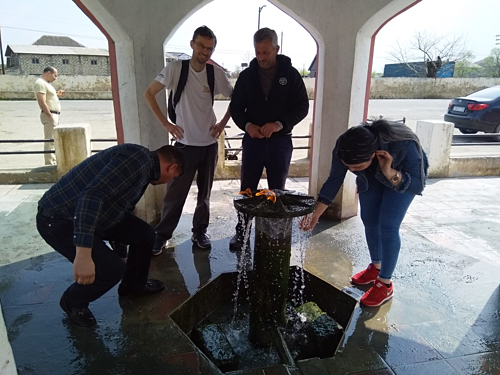 The fiery spring is one of the natural heritage proves the name "Land of Fire" of Azerbaijan, a country with eternal flames thanks to the huge underground gas. The world has very few natural water flows like Yanar Bulag. The United States has two communities of the same name Burning Springs (meaning burning streams) in Kentucky and West Virginia, named for streams of natural gas rising from the underground circuit here.

Yanar Balug Spring is located on the expressway Lənkəran, 9 km from Astara. If visitors come from Baku, the journey takes 3 hours 45 minutes. Usually taxi drivers will happily stop for a few minutes sightseeing.