The situation in the US is bad but why is the stock good?

The US stock market flourishes at this time is explained by an illusion that "investors know something that millions of people are facing unemployment."

Death and despair are taking over America. The number of people who applied for unemployment benefits in the last two weeks is about 10 times higher than the previous record and probably not fully reflected because the government's processing system is overloaded. A series of businesses closed indefinitely. What is happening indicates the risk of another Great Depression taking place.

However, by the close of the session on 9/4, the S&P 500 has increased by 25% compared to the recent low, ie March 23. For the whole week to April 9, the S&P 500 increased by 12.1%, the highest increase in a week since 1974. In fact, it only dropped about 14% this year, and up from 11 months ago. The extreme parallelism of a free-falling economy and a good stock market encompasses a number of reasons.

There are two strong forces pushing in two different directions. Trade is being disrupted to such an extent that it seems "unexpected" in just a few weeks. But at the same time, stock investors are betting that strong interventions from Washington - including the Fed injecting an additional $ 2,300 billion - will be enough for big businesses to rebound with little damage to long-term profits. . 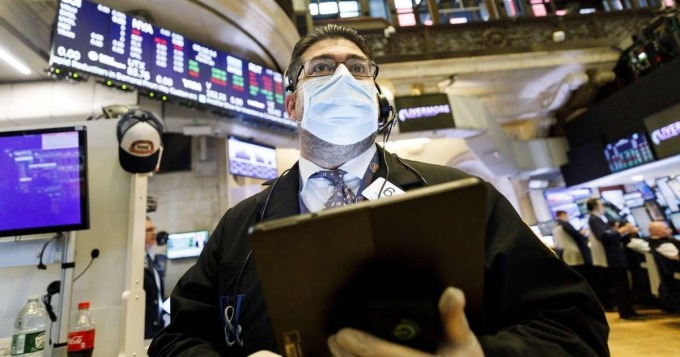 A trader on the floor of New York wearing a mask on the session on 19/3. Photo: EPA

It was a battle between economic collapse and the federal government's pumping of money. For the stock market, at least the power of pumping money is winning.

Gene Goldman, chief investment officer of Cetera Investment Management, says the paradox is that the rapidly rising number of applications for unemployment benefits may even be considered useful for the stock market. Because, it increases the political pressure on the National Assembly to strengthen rescue measures, in addition to the approved 2,000 billion package.

"Imagine you are a Democratic or Republican congressman discussing 16 million unemployed," Gene Goldman said, "It really creates a lot of pressure for bipartisan support for the next stimulus package." .

Companies that make large stock indices tend to have reliable access to capital, especially after the latest Fed actions to support corporate lending. They are more likely than small and independently owned businesses to escape difficulties and rise above market share and profits.

Analysts expect the company's earnings to be relatively mildly affected. They think that the companies in the S&P 500 will only see a 8.5% reduction in income in 2020, with sales down only 0.1%, according to Factset.

In addition, what is shown in the stock market also due to technical factors. In particular, some of the most active tickers on the market are the ones hardest hit by Covid-19 such as travel companies, hotel chains and airlines. That shows motivation from "short squeeze" (short squeeze). It is a situation in which a stock price goes up, and many people end up selling their positions to cut losses, adding even more pressure to that stock's price.

At the same time, Saudi Arabia and Russia have clearly reached a "ceasefire" agreement during the oil price war. The decision to reduce supply by 10 million barrels helped oil prices recover. This is good news for oil companies affected by the sharp drop in crude oil prices.

Finally, cash flows investing in safe investments, both from individual savers and the Fed, are pushing down long-term interest rates. This makes the future profits of shareholders, whether weak or uncertain, still more attractive than recovering high interest rates.

Stock prices are always based on what the world will be like in the future, not the present. During the global financial crisis, stock prices bottomed out in March 2009. The economy did not recover until July and the unemployment rate until October peaked.

Current market prices indicate that investors are expecting a quick recovery. "If this does not take longer than expected, that is, it takes 3 to 6 months from when we" turn off "until" on "the economy, the market has taken that into account and is looking towards. before, "said Jim Paulsen, chief investment strategist at Leuthold Group. According to him, the current market price does not take into account the case of viruses affecting up to 3-4 quarters.

In fact, the financial markets are betting at a certain level that things may return to normal soon. Stock prices are showing the assumption that a series of failures will not occur. That losing jobs on a large scale and reducing income will not lead to the closure of many businesses. That everyone will get a job back and will be willing to spend it when the public health crisis subsides.

Everything about this crisis happened very quickly, with the economy transitioning from a complete recession to a terrible recession within weeks. And the financial market is looking ahead to a possible future world. In particular, trillions of dollars from the Treasury and the Fed are launched to cure and prevent long-term damage of the pandemic.

"Stock markets in times of stress can be quite exciting," said Jason Pride, Glenmede's director of private equity investment. And according to the New York Times, this is an extraordinary moment, when we can only hope that stock investors can know something that millions of people are facing. the carpet did not know.