Trump, a businessman-like president, is at a loss as to whether he should listen to health experts or business circles about "when to reopen the economy."

American business is actively campaigning for President Donald Trump to reopen his business soon. Phone calls from old business friends are still coming. Even economic advisers and others in the White House told him that the solutions had worked and could "relax" the economy back.

Meanwhile, the image of the hospital overloaded on TV still makes him obsessed. Public health experts told him that what was doing was working, so don't relax.

The problem he faces is that tens of thousands of people could die or lose millions of jobs. "I will have to make a decision and I only hope to God that it is the right decision," Trump said Friday during a daily press conference about the fight against the pandemic. killing more than 18,000 Americans and more than 16 million unemployed. "But I can say without a doubt that this is the biggest decision I have ever made," he added. 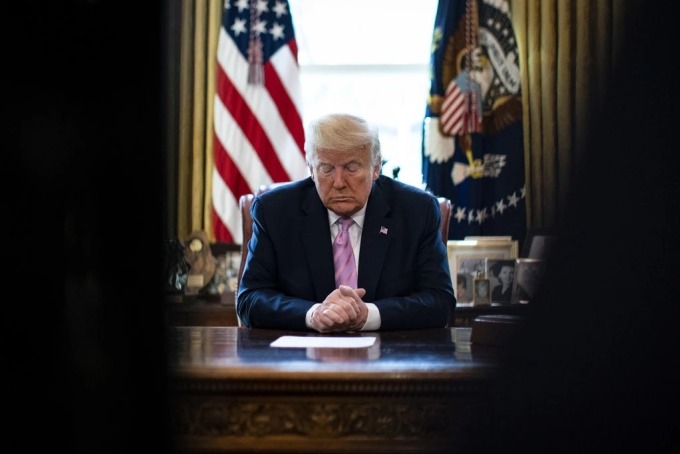 US President Donald Trump at a press conference on April 10, when he admitted whether reopening the economy or not will be "the biggest decision of life". Photo: NYT.

Catching new estimates of the lower-than-expected death toll, the president signaled that he wanted to start his business again on the basis of his home isolation guidelines expiring on April 30. Trump claimed to have assigned this task to a task force. But he also promised to listen to public health officials, who had warned against quitting isolation measures too soon.

In fact, deciding when and how to reopen the operation is not entirely Trump, as he never ordered closure. The ordinances requiring people to stay home are enacted by state governors. But the president issued non-binding instructions, urging to halt daily activities until the end of the month.

However, if Trump issues new guidelines, saying reopening operations or instructing how to restore safe economic activity, many states will most likely follow or feel pressure from businesses and voters to reduce restrictions.

Trump said it would need to ensure the country is healthy to resume full operation because it does not want to have to put restrictions again. But he added that the current "paralysis" is not good. "Do you know anything? Staying at home doing nothing will lead to death," he said. "It is a painful thing for the country."

By April 10, the number of deaths due to Covid-19 was confirmed to be more than 100,000. In the US, the number of deaths has surpassed Spain and is second only to Italy. The main question that drives discussions in Washington, New York and elsewhere is how long it will take until the country can start to return to normal.

Gov. Andrew M. Cuomo in New York, the hardest-hit state, said any relaxation restrictions would need to be done along with extensive testing on millions of workers first. Meanwhile, Trump said that it is not necessary to test all but to focus on screening in the most affected areas.

New US government projections this week have concluded that orders at home, school closures and social distance have significantly reduced spread. But the report also noted that, if the lifting of the order after only 30 days, as the president is considering, could lead to the risk of recurrence.

Christopher Murray, director of the Institute of Metrology and Health Assessment at the University of Washington, which has forecasts that the White House is confident, gave an additional warning not to lift restrictions too early. "If we stop the national restriction on May 1, we will face the current epidemic situation in July," Murray told CNN.

Previously, the White House accepted the forecast that an estimated 100,000 US deaths from the pandemic. But now the forecast has been revised to about 60,000, thanks to social isolation. However, Trump thinks the truth will remain the same as the original figure because 60,000 is a number that has been incredibly down.

But his public health advisers take a more cautious approach. Dr. Deborah L. Birx, coordinator of the White House pandemic said that the US has not yet reached its peak. She noted that without extensive testing, experts see only the most serious cases. "Is this the tip of the iceberg, or is it half the iceberg, or three-quarters of the iceberg?", She asked.

Five government officials said it was highly unlikely Trump would extend instructions at home after April 30. They added that the president will find ways to lift isolation measures, even if it is not a complete act of reopening normal life.

Trump has had conversations, both formal and informal, in recent weeks with business leaders on how to support the economy and when to reopen. In particular, lobby groups have become more vocal about the need for re-opening the economy.

David McIntosh, President of Club for Growth, said the more time it takes to shut down, the more difficult the economy will be. "What we need now is a plan to reopen because the growth curve has been flattened," he said.

Some business leaders were also particularly disappointed that the government was unrealistic about the economic consequences of the war against Covid-19. They believe that many health risks of pandemics cannot be solved by closing the economy. Jacob Wintersteen, a Texas real estate developer, says businesses should have the right to operate if they see fit, regardless of risk.

The president's economic advisers also lay the foundations for reopening the economy. Larry Kudlow, Chairman of the National Economic Council, said this week on the Fox Business Network that he could envision returning to work within the next four to eight weeks. Mnuchin told CNBC that this could happen soon after May 1. Kushner and Peter Navarro, two presidential trade advisers, also talked about reopening as quickly as possible, fearing that banks will start to have a real problem if they continue to shut down until May. .

Many experts warn that growth will slow down when operations resume, as people remain wary of normal activities before further testing of the country. A survey of business leaders and market participants this week by S&P Global shows that only 12% of respondents believe the economy will recover quickly.

A quick restart of the economy can also bring risks. Because if the government says people go back to their normal lives and then get infected again, that could eradicate consumer optimism and lead to a more prolonged recession. more harmful.

Karl Smith, vice president of federal policy at the Tax Foundation (Washington), said it was uncertain whether the impact of the pandemic would end in June or any time near. "Even after the official restrictions are lifted, a lot of people are unlikely to return to normal life immediately. Companies are still worried that workers may be at risk," he added.